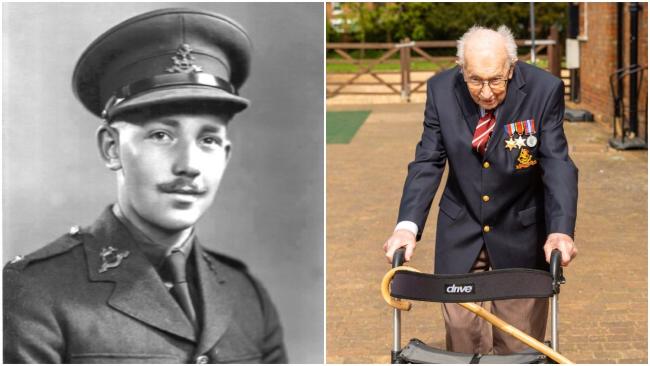 Today we are celebrating the extraordinary Captain Tom Moore.

There’s an expression Steve Jobs used about wanting to ‘put a ding in the universe’ and it’s safe to say that Captain (now Colonel) Tom Moore has done just that.

In case you’ve missed it, he is 100 today.  For his birthday, he’s getting the usual things that you would expect:

A train set (well, two trains named after him)

Messages from loved ones…. and the Prime Minister…. and members of the Royal Family

Oh, and he’s made the England Cricket Team as well!

The outpouring of affection and the way he has inspired so many of us across the globe, across the generations and across all sectors of our society is something that touches me deeply and says a lot about what makes us all human.

So, what is it that has connected so many of us to his story?

Well, there are a few things and i’d like to highlight just two of them.

1. Contribution
Captain Tom has found a way to contribute to the world at a time when he really could have been forgiven for staying at home and trying to ride out the pandemic.   He has taken a simple idea and as a result raised over £30million for the NHS which is astounding.

That sense of contribution lies in us all and when we’re given the opportunity to make a difference to others and, in a way that is meaningful for us, it brings inner happiness and fulfilment to our lives too.

2. Kindness
Tom’s efforts have shown us, very clearly, kindness towards other people.  These are people he doesn’t know personally, and he still wants them to know that he cares about them.  It’s sometimes difficult to feel kindness when the world can often be difficult and some people can seem mean-spirited towards us.   The reason I’ve connected to this story particularly is that he has demonstrated that kindness attracts more kindness.

After some very difficult and unkind times, recently, where this country has been divided, where false stories have populated the world’s social media and where bullies have existed, with impunity and anonymity online, being kind is something we could all be more aware of.   Tom’s example has demonstrated to us all what a difference it can make.

Way to go, Colonel Tom, you are a true role model!